Continuing on our Southwestern PA leg of Haunt Tour 2013 this past weekend, +Carrie H.C. and I decided to check out a most unique Halloween event....Castle Blood in Monessen, PA. This is another haunted attraction that is close to us and we just couldn't resist passing it up this year as we're trying to hit every haunt we possibly can. Have to say, this one was not what we were expecting at all...in a good way.

This year finds Castle Blood celebrating it's 21st season of operation, and having moved around a bit during that time, the castle has finally found a year round home.

Due to that, not only do they have their Halloween event but also several others throughout the year as well. Valentine's Day, a family friendly Christmas event and even a mid-summer show are all on the table as well.

With all that, you're never far from being able to spend a little time with the fiendish inhabitants no matter what the season!

Now then, what of the Halloween season? Castle Blood claims itself to be the most unusual haunt in the state of Pennsylvania and for once, a lofty claim is met head on. The denizens of this strange and bizarre castle own that one completely. It's not even a question here. However, one should be warned in advance that this is NOT your typical haunted attraction that "chases you to the gift shop with chainsaws". Oh no, this is a story driven adventure that you and your group partake in and you're very much a part of things as you travel

through this gorgeously themed haunt. However, don't let your guard down too much...this castle has a few tricks up it's sleeves and you likely won't see them coming.
Disclaimer: We were invited to take a tour of the castle this year by Gravely, himself. This in no way has impacted our views or opinions of this event. Not that it ever would, but just saying...

So, now that we're done with the formalities, let's see what Gravely and the rest of the Castle Blood residents have in store, shall we?

Before I get too into this, we did have plans to show up earlier in the afternoon, but rain and a few other issues kept us from arriving until a bit later in the evening. Definitely was a bit of a downer as earlier there was a Hearse and Haunt Rod show along with live music and other festivities.

After seeing the pictures on their Facebook page, it made us wish we could've gotten down sooner to see things first hand and chat with the cast and crew behind this ever so interesting attraction.

Anyway, that's enough about the things that we didn't get a chance to see. Let's get to what we did see and experience during the time we had at Castle Blood... 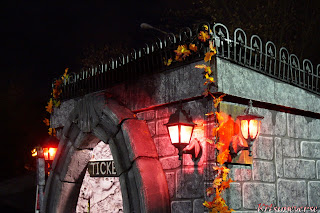 Upon our arrival, there was a healthy crowd outside, despite the rain earlier, and after a little confusion of where we had to go (more common than you think on our visits). That said, we were graciously helped by their guitar wielding troubadour, Cedric. His banter with the crowd was definitely entertaining as were some of the songs that he came up with on the spot as well.

A short wait later we found ourselves face to face with the herald, who gave us a run down of what we could expect. The group we were with was also here for the first time, so it was beneficial to all of us.

Before entering we were reminded that this is not your typical haunt and that it was more like "Clue meets the macabre" in it's nature. Neither Carrie nor myself were 100% sure of what this would entail. We've done interactive haunts before, so we had an idea, but we were definitely intrigued by the concept of this mash-up to say the least.

By now the gong sounded and we were let inside, only to be greeted by none other than Gravely Macabre himself. This was definitely a treat to say the least and as our group was assembled in the casket lined entrance hall, Gravely gave us the once over. From here he imparted more of the back story and some history of the castle, along with a few warnings and rules of the house as well.

It was after this that we met up with the second of the castle denizens, Lady Die. It's here where the "Clue like" elements come through and you're faced with the task of finding certain items as you go along. All of this is decided through interaction and the choices that those in your group makes at this early moment of the night. We're also told that if we find everything, there's a prize waiting for us at the end as well!

This is really an interesting spin on things and it's at this moment where you can really get a good bead on your group as well...sadly, ours was a bit...dimwitted as it were. This was also noticed by a few of the cast, a point to which they had great fun with at that.

Never the less, we were determined to not let that get us bogged down too much (we even had a few good laughs at their expense) and set our sights to making the most of this very strange and bizarre tour as we moved into the next area. Shortly after an encounter with another resident, we were introduced to our castle tour guide. One, who while a little strange, was definitely entertaining. However, due to the nature of some areas, it was a bit hard to hear him or see what he was talking about as we found ourselves at the back of the pack. So, heed the call and stay close as you're led throughout the halls, rooms and crypts of the castle.

As our guide took us deeper and deeper into the castle and along the way we ran into more and more amazingly detailed environments. This entire place is a master class on set design and it really does pay off to look around some. Which, you can actually do since you're not being funneled through conga line style like many other places.

Really, you should try to take as much in as you possibly can because there's tons of detail all around you. Every nook and cranny that they could find, there's something there and it just makes the entire place look all that more lived in and real. As they say, "The devil is in the details" and they haven't forgotten that here at all.

During on our journey through this macabre wonderland, we found ourselves face to face, and interacting, with a plethora of unique and interesting creatures. Everything from fortune tellers, witches (one of which took quite the fancy to me for some reason), demented doctors, vampires and and a few other restless souls who are just out for a stroll through the castle. All of them adding layer upon layer to the story and atmosphere all the more. Some of them needing your help with things and others...well, you'll just have to see for yourself.

What kind of help? Well, at times your group will be asked to participate in a more hands on manner in a few of the scenes. It's nothing intense or extreme, so don't worry much about that here. When it happens though, don't be shy and have fun with it as it will be that much more rewarding in the end. Despite the fact that the group we were with wasn't firing on all cylinders, this was easy to see and we enjoyed every moment of it. Again, the more you're into things, the more you'll get out of the experience.

I won't detail too much more beyond here, no sense to be giving anything more away other than the fact that there's definitely a colorful and delightfully grim cast of creatures and ghouls who reside in this castle. All of them with a purpose and reason to be around. Well, mostly...we think. All of these creatures of the night are very unique and a bit strange, much like we are, so who knows what their truest intentions for you are...

Speaking of the residents, I'd be remiss to not mention one of the newest residents of the castle, ZAP. I'll be honest here, I totally didn't see this little ball of energy coming at all. While, I can't say that I was scared or even startled, it was a great bit of performance put on. She'll definitely not only be keeping the doctor on his toes but anyone else that crosses her path as well!

All this combined with the startle scares sprinkled throughout and a few things you won't exactly expect, can and will make for quite the unusual and interesting journey.

Castle Blood really does deliver on its reputation and promise. That being one of a rich, story driven haunt experience that is more like interactive theater than anything else. While you won't find evil clowns, chainsaws or gore within it's walls, you will find an experience that's like no other. Just remember to let yourself go, relax and enjoy each moment fully. 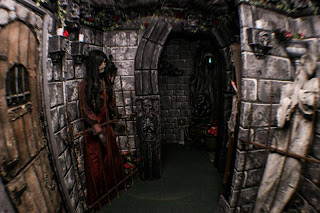 I do, however, wish it was a bit longer and maybe a bit larger. Most places cringe when I say that kind of thing and while it's great they've found a permanent indoor location, it seems a bit on the small side for what they're doing here as a whole. Personally, it seems as though they could really use a bigger location to showcase all of their skills and talent fully.

That and while they're not a startle/in your face style haunt, I kept wishing there was just a tiny bit more in that department here. Maybe it's just a placement or timing thing though, we just could've liked a bit more.

Those really are just minor things in the grand scheme, they're working with what they have and they do it extremely well. The other thing that I kind of wish was present? Maybe letting a little more chance play into things. If it were just a slight bit more challenging or unpredictable, that could raise the level of things here even more I think. Not that I even know how that would work, but I'm sure that these folks could definitely figure it out somehow.

In the end, every bit of accolade this haunt gets is definitely deserved. If you're anywhere in the Pittsburgh/Southwestern PA area and are looking for some Halloween thrills and chills that are a bit different, definitely take a tour of Castle Blood. This is a 100% actor and story driven adventure into the macabre, one that any fan of all things Halloween is sure to enjoy!

For more info like directions, ticket prices, hours and all manner of other interesting tidbits, head over to the official Castle Blood website.
Leave a Comment
submit a review Join our blog team